Alsace is a romantic French region on the border with Germany, where time seems to standstill. This part of France is enchanting. Characterized by intact medieval villages with pastel color houses, surrounded by vineyards and green fields, where storks fly undisturbed in the sky. During my visit

Last year during the Easter break, I organized together with my boyfriend a road trip around Alsace along the famous Route du vin (Alsace wine route). We spent five days around Alsace villages and for the entire time I had the feeling of being inside a fairytale book or a Disney movie.

After more than 5 hours drive we arrived in Strasbourg, which was our first stop. We stayed there for two days and slept in a hotel not too far from the Cathedral. The European capital was the city that intrigued me the most among the five cities we chose to visit. The atmosphere in Strasbourg is cosmopolitan, modern and international but you can also feel the French elegance and touch everywhere.

La petite France is the most picturesque neighborhood, with colorful timbered houses overlooking the river, but it is way too crowded during the day. For this reason, we decided to visit it the following day during the early hours.

We woke up at 6:30 and one hour and a half later we were strolling around the streets of la Petit France. We were the only ones there. All shops were closed and everything was so silent. The flow of the river and the singing birds were the only sounds around us.  It was a memorable experience. I recommend you to explore this part of the city in the early morning, just after the sunrise.

Colmar is the most beautiful and colorful town in Alsace. The canals, the romantic bridges, pastel timbered houses and colorful shutters make Colmar a dream city.

The district of the petit Venice is crossed by the river Lauch. It has several picturesque bridges and canals reminiscent of those of Venice, hence the name. The cute houses reflect themselves in the river coloring the water with different shades of pink, green, blue and yellow. One way to admire Colmar’s beauty is to join a short cruise on a small boat along the main canal.

Along the wine route there are several fairytale villages, but my favorite is Eguisheim. A tiny medieval village that has remained unchanged over the centuries. The village has a particular shape, is composed of concentric circles, and in the center there is the castle square. Eguisheim is really small but colorful, due to its charming houses with balconies and windows covered by geranium. Around the village you can find many artisan’ s workshops and wine shop.

Is it a daydream? No, it’s everything real!

We stayed in this village for 3 nights in a lovely AirBnB. Eguisheim is just 7 km from Colmar but it is way less crowded. Staying here gave us the opportunity to enjoy this little town from the early hours of the day till the evening, when most of the tourists leave.

Another village you can’t miss when visiting Alsace is Kayserberg. A tiny town with less than 3000 inhabitants. It is so beautiful that it won the title of favorite French village in 2017. The town is lovely and it is surrounded by vineyards. All the houses are charming but the cutest are along the edges of the Weiss river.

Riquewir is composed by narrow alleys with vivid color houses, it recalls the variety of colors on a painter’s palette. Disney was inspired by this town to create Belle’s village in Beauty and the Beast. To be honest it is difficult to say which of these villages inspired Disney’s creators. 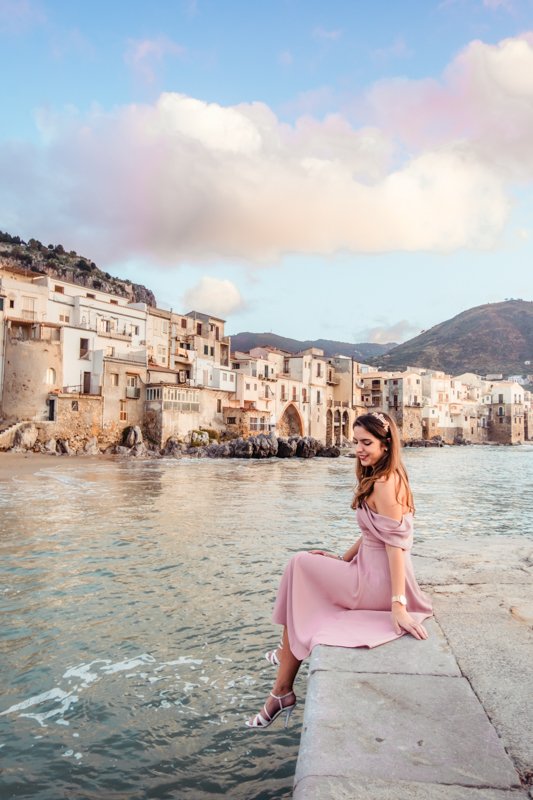